The FIFA World Cup 2022 is upon us. As the world renews its die-hard soccer fandom for the every-four-years event, USDish dives into the World Cup record books to tell you about host countries, high-performing squads, and the biggest scorers. We know the game is on, but step away for a moment, grab your jerseys and hold on tight to see if your favorite futbòl club and player has made the record books.

The Hostess with the Mostest

Making it to the big dance is no easy task. Brazil has been the most successful country, making it through World Cup Qualifiers 21 times. Germany’s right behind them with 20 qualifications, while Italy rounded the top three, qualifying 18 times.

Ted Lasso Would Be Proud

The fictional yet lovable soccer coach once said, “the harder you work, the luckier you get.” And while these teams may not think of themselves as lucky, they worked hard to not just qualify for the World Cup, but make it past multiple rounds against other formidable teams. The aforementioned Germany squad made it to the semi-finals 14 times and to the finals eight times, making them one of the most successful teams in World Cup history. But success is measured mainly by the number of championships, and Brazil holds that title with five rings, making them the winningest country in World Cup history.

Of course, no team is successful without the individual efforts of their players. And as simple as it may sound, you can’t win a soccer game without scoring some goals. Miroslav Close of Germany currently holds the most goals in World Cup history with 16 goals over 24 matches. But two players took advantage of a shorter time in the spotlight, as Just Fontaine of France scored 13 goals over six matches and Sándor Kocsis of Hungary scored 11 goals over five matches, giving them each an average of over two goals per match!

We analyzed the countries that have qualified for the FIFA World Cup the most and least. We included data on who has hosted the championship, semi-finals, finals, runner-up, and won. We gathered the data with the help of FIFA, which collects historical data since the championship was awarded.

USDISH is an authorized reseller of DISH Network. For any media inquiries, contact media@usdish.com. 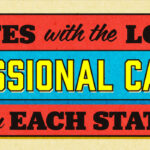 Who in your state played their professional sport for the longest time?